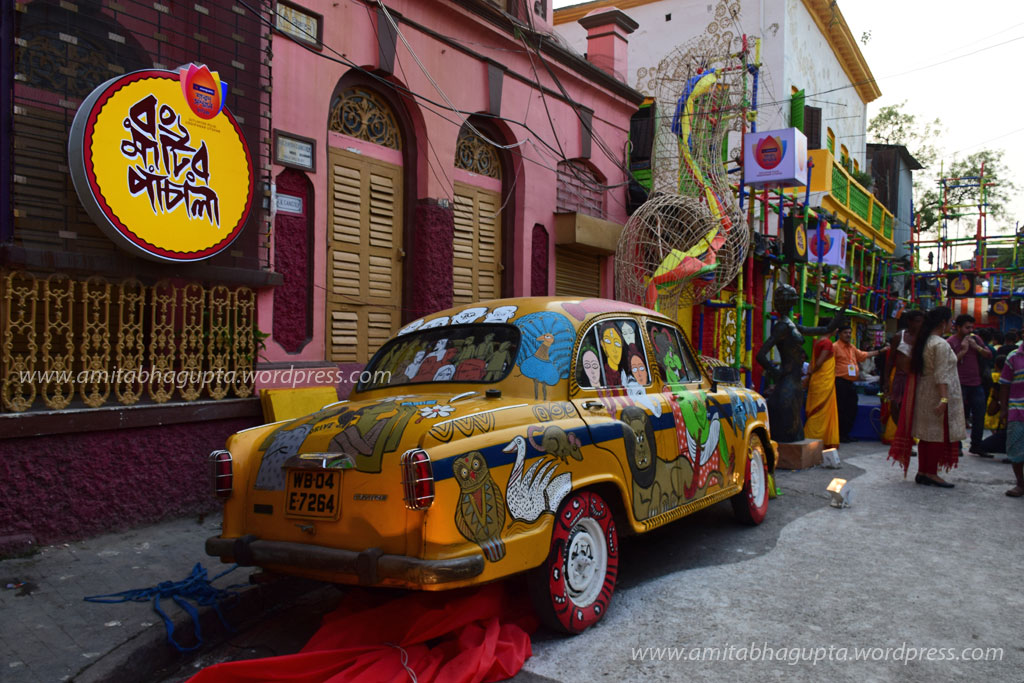 I have visited many art exhibitions/festival at Kolkata, but nothing compares to the one which I witnessed yesterday at Poila Boishak alias Bengali New year’s day at Kumortuli. Asian Paints under its annual Sharad Shamman drive had launched a two-day art carnival named, ‘Rang Matir Panchali – 2019’ at Kumortuli, the artisan’s hub of Kolkata on the occasion Bengali New Year as well as World Art Day. Reaching Kumortuli yesterday afternoon, I found that the houses at major areas of Kumortuli have been repainted with vibrant colours, some studios have been given a new look, and several art installations are being put in place all over Kumortuli. I have been visiting Kumortuli since 2002, but it never looked so beautiful. The whole area has been converted into a vibrant and functional art village for the carnival.

The preparation has been going on for sometimes. My friend Manojit Mondal had visited Kumrtuli during the time of preparation and send me some photographs of the scenario. I am sharing them here in my blog. After a hectic week, I someway managed to visit the show on the last day. As it turned out, it was an exhibition not to be missed. This is the one, where you must be present physically to get the essence. Mere viewing of photographs does not give the total feel of the place.

As I entered through a colourful gate at the entrance of Banamali Sarkar Lane, a volunteer tied a colourful armband on my right hand featuring the name and logo of the festival. On the background, a commentary by legendary actor Soumitra Chatterjee was being played narrating the life and history of artisans at Kumortuli. The script coupled with Soumitra Chatterjee’s voice was engrossing and at places, it gave me goosebumps.

The place was crowded with photographers and art lovers who were busy admiring and clicking photographs of the art installation. Talking to representatives of the organizers I came to know that an event management firm named Creocraft conceived the art festival with support from Asian Paints. Around 30 artists of Kumartuli were involved in changing the scenario of Kumortuli supported by Art college students and three inmates of Pavlov mental hospital. Eminent Durga Puja theme makers Sushant Pal and Partha Dasgupta played the lead role in making this art carnival into a reality.

Wall graffiti is catching fast as an art-form in Kolkata. Near the entrance of Banamali Sarkar lane, a house has been painted in vibrant red colours. The star of the attraction were two art installation, one was a Taxi painted with caricatures of Durga and family riding the car while the Asur was driving the car. In the total history of Goddess Durga, probably this was the first time that the Asura was in the driver’s seat. The other crowd puller was an installation displayed in the artist studios of Kumortuli where a nude woman is seen seated on a cot with her sari sloping down on her body from the backside, while Goddess Durga looks on. There may be many interpretations of this. I felt this shows that the Goddess is present everywhere and not essentially in the grand traditional mansions and Puja Pandals.

The other highlights of the exhibition was an unfinished Durga on a boat, collage of giant head of Goddess Durga, a tea shop with a lifelike Tea vendor, a collage with names of the artist, some abstract open installation as well as indoor installation. There was a small collection of photographs of Kumortuli with its history in one of the artisan’s studio. Everyone with a camera was having a great day, though most were busy taking a selfie than clicking photos of the artworks. Many had just visited as an art lover or a spectator. I met many known faces whom I had not met over the years.

After the sunset the artworks were illuminated with various lights, giving Kumortuli a totally new perspective. Kolkata was looking in bewilderment at these artwork installations as never before. It was the last day of Basanti Puja too (The Original Durga Puja), so the atmosphere was like pandal hopping during Durgapuja.

We left Kumortuli around seven, hoping such art carnival becomes an annual affair. As we were leaving, I heard one photographer asking his friend. “How long these will stay? Will the graffiti on the wall stay as it is now? ” His friend said “No idea, buddy.” The first photographer sighed and said “Well, I hope It remains for a long time. Soon I will have two pre-wedding shoots in hand. If these remains, I can have my pre-wedding shoot done here only.”

Special Thanks
1. Aritra Biswas and Dibyendu Biswas for accompanying me to Kumortuli