I was standing beside a waterbody with dense fog around. I could see several silhouettes of human being walking in front of me besides this shallow mass of water. I felt as if I was dead and standing in afterlife. The shadows seemed like spiritual aatmas (souls). The waterbody looked Vaitarani River which lies between Earth and Hell as mentioned in many Hindu religious texts. It is also said that all sinful souls are to cross this river after death to purify them.

Suddenly the shadows started getting in to the river splashing water around. That commotion broke my trance and I realized that I was standing on the banks of River Ajoy at Joydev-Kenduli village.  People were getting down into the chilly waters of the river on a cold January morning on the occasion of Poush Sankranti or Makar Sankranti, the last day of Bengali Calendar Month. There were makeshift bridges made over the river for the devotees.

In many places fire were lit up where people were drying themselves and their clothes after taking the holy bath. Young- Old, Male-Female, Child and Aged – all were taking a dip into the freezing cold water.

Joydev-Kenduli is a small village located on the banks of River Ajoy at Birbhum district of West Bengal. The village is the birth place of poet Joydev Mishra who wrote the famous Sanskrit poem Geet Govinda in the 12th century. He was the Sabha Kobi (Court Poet) of King Lakshman Sen. The poet worshiped at the Kusheswar Shiva Temple at Kenduli, where his square meditation stone still exists. The present temple is just about 100 years old (1910 built), while the original temple was a small earthen structure located in the midst of deep forests of Kusha trees.

There is a joint Shiva Temple of Rameshwar and Ratneshwar too. However, the most important temple and star attraction of the village  is  the famous 17th century built Navaratna Radhabinod temple. The temple is presently undertaken by ASI (Archeological Survey of India).  As the saying goes, this temple was built at the site of Poet Joydev’s home by Nairani Devi, the Maharani of Burdwan. Inside the temple there is a small inner chamber in the western side. Legend says Poet Joydev was born in this inner chamber.

The most prominent is that of a huge bird trying to engulf a chariot. Many consider this to be Jatayu attacking Ravana as he was eloping with Sita. But actually this not Jatayu, but the demon bird Suparsha trying to engulf Ravana’s chariot. Suparsha is mentioned only in Ramyana written by Krittibas Ojha and this motif is seen in the walls of many temples of Bengal. The specimen adorning the Joydev Kenduli Temple is perhaps one of the best.

Every year from 14th January onwards a three day long fair is organized at Joydev Kenduli village.  The origin of the fair is an age old history.  The story goes that the Poet Joydev had to walk some 30 km plus distance from his village at Kenduli to take a dip in the Ganges. This became tiresome for the poet and one day Lord Bishnu asked the Holy Ganges to infest her holiness in River Ajay of Kenduli at least on the day of Makar Sankranti. From then on this holy day the Ganges starts flowing back to River Ajay.

Geet Govinda was an epic poem on eternal love between Radha and Krishna. In fact in this ballad, for the first time Radha is given the most prominent role. It is said anyone who takes a dip on this auspicious day in the River Ajoy has his /her wishes fulfilled specially on the love front.

From 1982, Kenduli fair is under the control of district authorities, who have tried to provide quality basic needs like drinking water, sanitation, lighting, make shift accommodation arrangements and security.

Though during Makar Sankranti the Gangasagar Mela  of Sagar Island attracts more urban visitors and photographers, the fair at this small village of Birbhum has its own charm. To start with there is an everlasting chaos in the area, especially in the early morning hours when with people makes frenzied rush to take holy dip in the waters of River Ajay. Kenduli fair provides an opportunity for masses to listen to Baul songs over three days. Bauls are singers who travel and sing soulful songs. They are mainly Vaishnava Hindus or Sufi Muslims, but their music spreads love above religion. Recently the Kirtania singers are also making their presence felt in the fair.

We had stayed the earlier night at a friend’s house at Bolpur and started early at around 05:00 in the morning. The fog was extremely thick and headlights of Trucks falling from the opposite directions were of more discomfort. In fact saw a Bus driving in this fog with only head-light on.We drove through Ilambazar to reach the gates of the fair at 05:45 in the morning. It was still foggy and as we went walking with a crowd on a pathway with several tents and shops around towards the river.

Like Gangasagar, Kenduli fair is full of characters. At first I noticed several people sitting on the side of path with uncooked rice, coins and some potatoes scattered in front of them. These are poor villagers, whom people offer rice, money and other edibles on this day. On the same path a group of musicians chanting “Hari Bol! Hari Bol!” soon came along.

As we were shivering in the fog with a chilly wind blowing around, devotees around seemed to have forgotten the feeling of cold. From child to feeble old all was busy taking their holy dip to get their wishes fulfilled. I spotted a smiling Sadhu playing a violin out in front of a Goddess Kali Idol. Then there was a middle aged lady singing Lord’s name with the small musical instrument khanjani. She was singing so devotedly with tear drops rolling from her eye that she didn’t seem to notice me in front of her.

Was this due to eternal love, blind faith or these people were in a trance? For an urban person like me it was somewhat difficult to reason out the cause of this Vaishnavi’s tears or the cause of mass bathing of the people. Perhaps the Vaishnavi could visualize the lord inside her, which can be only achieved by faith.

Poet Joydev had himself forbidden anybody and everybody to read Geet Govinda.  In his own words Joydev mentions somewhat like this:

‘If your heart yearns to delight in remembrance of Sri Hari; if you are hankering to contemplate upon Him with intense affection; if you are overwhelmed with curiosity to know about His skill in amorous pastimes – then by all means read this book. You will find my lovely poetry to be extremely relish-able. Although it is so emotive and mellifluous, if you are not possessed of the aforementioned qualifications, then you must not read it. This literature is not for you.’

Some Vaishnavas had completed their bath and were putting Chandan Tilak on each other forehead. There was a woman in them too, who bend down on her knees and touched her Guru’s feet. Village Musicians were playing in the crowd and devotees were paying them some money.

A Mother was about to give her small child a bath in that freezing water. The child was crying, but the lady looked as if she was in a trance. As if the very thought of getting her child the privilege of getting a holy dip in the river was giving her a thrill.

There used to be more Bauls singing besides the river earlier, but most of them sings inside their tented akharas on the stage. Many of them were however singing sitting outside their tent singing loudly. Not everyone was singing melodiously, but then if you follow the lyrics it mainly speaks of eternal love and human bonding.

Out of the several Sadhus there I observed one old sadhu , who probably had a cataract operation, but there was a big crack on the middle of his glass. He could barely see and he was traveling alone. Why has he come here ? To see to lord with his inner eyes ? The Sadhu smiled at me . He did not show any signs of discomfort.

The Fair has several stalls from eateries to clothes, cooking utensils and paintings. Most popular is the paintings of poet Joydev and his wife Padmavati. It maybe mentioned here though Joydev was a Shaivite , Padmabati was a Baishnavite.  Their “Jugal Sadhna” resulted in the Poet coming up with his all time Classic – Geet Govinda.

Spiritual Love is the essence of Joydev Kenduli fair. To feel the pulse of love you need to get your mind out of the crowd here and emphasize deep inside your heart.

Bolpur is just 40 km from Kenduli. Make you base at Bolpur and drive there in a hired car. Bus service is available from Jambuni bus stand at Bolpur to Jaydev Kenduli. It takes about two hours.  Several trains go from Seladah to  Bolpur which is around 3 hour journey.  You can drive from Kolkata via Burdwan and Durgapur. The distance is around 185 km and takes three hours. It can be a day trip as well.

2.  Sumon’s Friend Rabi who arranged the accommodation and the car 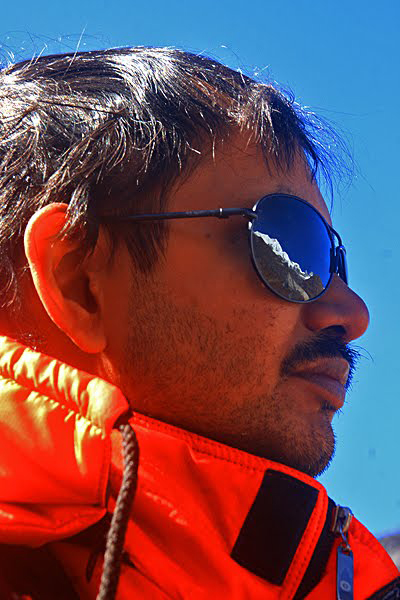